Bill Duthie was the founder of the Duthie’s Books, which now has a number of branches in the Vancouver area. Born in Weston Ontario, Duthie graduated from the University of Toronto and served in Italy during World War II. He joined the book trade in 1947 as a sales rep for Macmillan of Canada in rural Ontario and Quebec. Duthie became the first full-time western book rep when in 1953 he offered his services first to Macmillan and then to McClelland & Stewart as well. Once in Vancouver, according to his wife Macie, he decided he wanted to sell books to people who wanted them, rather than to reluctant stores. He opened the first Duthie Books on Robson Street in August of 1957, taking care to locate his store near the Vancouver Public Library. He subsequently opened branches on West 10th, Seymour, Hastings, and in the Arbutus Village. The Seymour and Hastings outlets have since closed, while the remaining stores have been expanded. Bill Duthie died of cancer on April 6, 1984 at the age of 63. 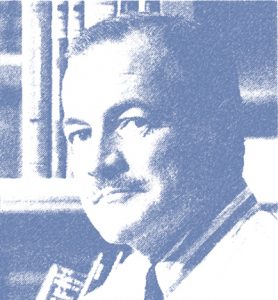