Awarded to the author(s) and/or illustrators of an original work of published writing (poetry, fiction or nonfiction for adults or children, including graphic novels or picture books) that challenges or provokes the ideas and forces that shape what writing, art, and/or society can become.

Supported by a generous donation by Bruce Smyth

Jim Deva and his partner Bruce Smyth opened Little Sister’s Gay and Lesbian Bookstore and Art Emporium in 1983. In 1985 an order of books was seized at the border having been deemed obscene. And so began an ongoing battle over censorship and the freedom of information. Books and magazines containing life-saving information about safer sex practices in the middle of the AIDS crisis were prevented from crossing the border, an injustice that Deva and Smyth refused to tolerate. Award-winning literary titles by queer authors were deemed offensive.  For over two decades, Deva, Smyth, and bookstore manager Janine Fuller fought back, eventually taking the case to the Supreme Court of Canada in a series of trials. In addition to community activism, Jim Deva was renowned for his dedication to the freedom of information, and the freedom of sexual expression and identity.

Prior to opening the bookstore, Deva’s love of literature made him want to be an English and Drama teacher, but it was illegal at the time to be an openly gay teacher in Canada’s public-school system and Jim Deva was unapologetic about who he was. Hailing from rural Alberta, Deva made a home in Vancouver’s West End where he was a pillar of his community, championing the rights of the people in the margins, the queer community, sex workers and anyone who was not free to be themselves. Jim died suddenly in 2014 at the age of 63.

We are honoured to be able to help continue Jim’s legacy of upholding and safeguarding dignity and respect for all. 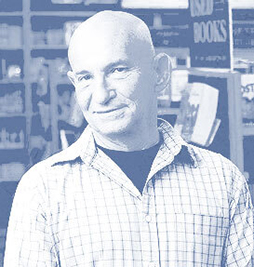