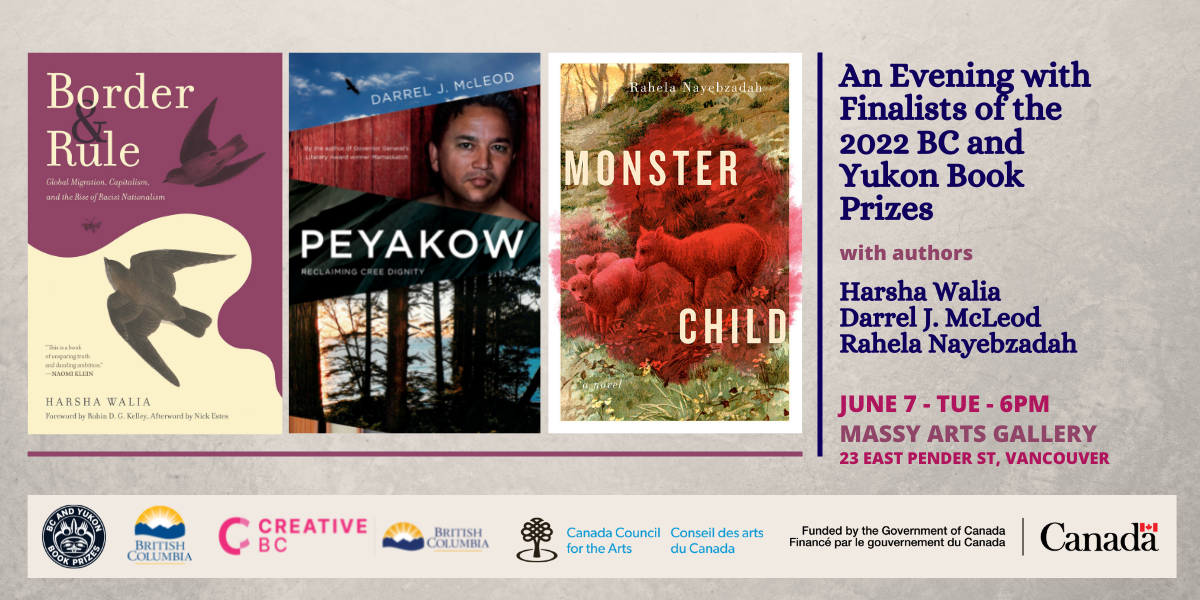 The in-person event will feature the books Border and Rule: Global Migration, Capitalism, and the Rise of Racist Nationalism (2021, Fernwood Publishing), Peyakow: Reclaiming Cree Dignity (2021, Douglas and McIntyre), and Monster Child (2021, Wolsak and Wynn Publishers), followed by a Q&A session with the audience.

The event will be hosted at the Massy Arts Gallery, at 23 East Pender Street in Chinatown, Vancouver.

This event is free + open to all of our community, and registration is mandatory.

Covid Protocols: For all in-person events, attendees must provide proof of vaccination, wear a mask (N95 masks are encouraged and recommended as they offer the best protection), and consent to having their temperature checked at the front door. We ask that if you are showing any symptoms, that you stay home. Thank you kindly.

Click here to purchase Border and Rule by Harsha Walia

In Border and Rule, one of North America’s foremost thinkers and immigrant rights organizers delivers an unflinching examination of migration as a pillar of global governance and gendered racial class formation.

Harsha Walia disrupts easy explanations for the migrant and refugee crises, instead showing them to be the inevitable outcomes of conquest, capitalist globalization, and climate change generating mass dispossession worldwide. Border and Rule explores a number of seemingly disparate global geographies with shared logics of border rule that displace, immobilize, criminalize, exploit, and expel migrants and refugees.

With her keen ability to connect the dots, Walia demonstrates how borders divide the international working class and consolidate imperial, capitalist, ruling-class, and racist nationalist rule.

Ambitious in scope and internationalist in orientation, Border and Rule breaks through American exceptionalism and liberal responses to the migration crisis and cogently maps the lucrative connections between state violence, capitalism, and right-wing nationalism around the world.

Further, she compellingly details how Fortress Europe and White Australia are using immigration diplomacy and externalized borders to maintain a colonial present, how temporary labor migration in the Arab Gulf states and Canada is central to citizenship regulation and labor control, and how far-right nationalism is escalating deadly violence in the United States, Israel, India, the Philippines, Brazil, and across Europe, while producing a disaster of statelessness for millions elsewhere.

A must-read in these difficult times of war, inequality, climate change, and global health crisis, Border and Rule is a clarion call for revolution. The book includes a foreword from renowned scholar Robin D. G. Kelley and an afterword from acclaimed activist-academic Nick Estes

Harsha Walia is a South Asian activist and writer based in Vancouver, unceded Coast Salish Territories. She has been involved in community-based grassroots migrant justice, feminist, anti-racist, Indigenous solidarity, anti-capitalist, Palestinian liberation, and anti-imperialist movements, including No One is Illegal and Women’s Memorial March Committee. She is formally trained in law, works with women in Vancouver’s Downtown Eastside, and is the author of Undoing Border Imperialism (2013).

Mamaskatch, Darrel J. McLeod’s 2018 memoir of growing up Cree in Northern Alberta, was a publishing sensation—winning the Governor General’s Literary Award for Non-Fiction, shortlisted for many other major prizes and translated into French and German editions.

In Peyakow, McLeod continues the poignant story of his impoverished youth, beset by constant fears of being dragged down by the self-destruction and deaths of those closest to him as he battles the bullying of white classmates, copes with the trauma of physical and sexual abuse, and endures painful separation from his family and culture.

With steely determination, he triumphs: now elementary teacher; now school principal; now head of an Indigenous delegation to the UN in Geneva; now executive in the Government of Canada—and now a celebrated author.

Brutally frank but buoyed throughout by McLeod’s unquenchable spirit, Peyakow—a title borrowed from the Cree word for “one who walks alone”—is an inspiring account of triumph against unimaginable odds. McLeod’s perspective as someone whose career path has crossed both sides of the Indigenous/white chasm resonates with particular force in today’s Canada.

Darrel J. McLeod is Cree from Treaty-8 territory in Northern Alberta. Before deciding to pursue writing, he worked as an educator, chief negotiator of land claims for the federal government and executive director of education and international affairs with the Assembly of First Nations. He holds degrees in French literature and education from the University of British Columbia. He currently lives in Sooke, BC, and divides his time between writing and singing in a jazz band.

In a powerful debut novel author Rahela Nayebzadah introduces three unforgettable characters, Beh, Shabnam and Alif. In a world swirling with secrets, racism and a touch of magic we watch through the eyes of these three children as Nayebzadah’s family of Afghan immigrants try to find their way in an often uncaring society.

But as a sexual assault on thirteen-year-old Beh unleashes the past and destroys the family the reader is left wondering who is the monster child? Is it Beh, who says she is called a disease? Is it Shabnam, who cries tears of blood? Is it Alif, who in the end declares “We are a family of monsters”? Or are the monsters all around us?

A mother of two, Rahela Nayebzadah holds a PhD in the Faculty of Education from the University of British Columbia. Currently, she is a schoolteacher. Her autobiographical novel, Jeegareh Ma (2012), was based on her family’s migration to Canada from Afghanistan.