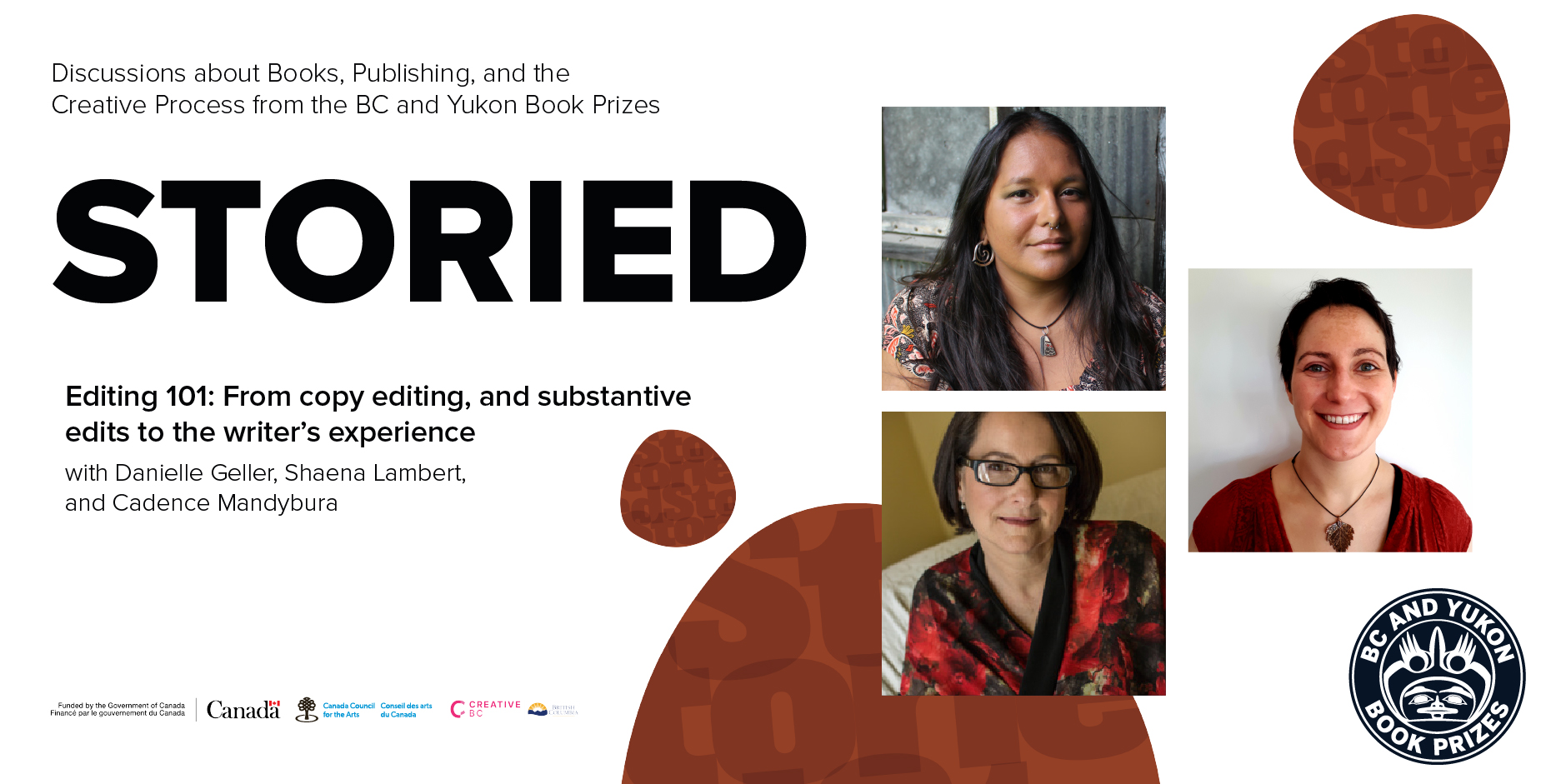 Curious about the editing process? On Wednesday, January 25th, three writers and editors will give tips, tricks and insights about copy editing, substantive edits, and the writer’s experience. Danielle Geller, Shaena Lambert and Cadence Mandybura will each give a mini lecture on an aspect of editing before taking audience questions. Danielle Geller’s book Dog Flowers was a finalist for the 2022 Hubert Evans Non-Fiction Prize, and the 2022 Jim Deva Prize for Writing that Provokes. Shaena Lambert’s novel Petra won the 2021 Ethel Wilson Fiction Prize and she’s worked with past BC and Yukon Book Prize finalists such as Darrel J. McLeod. Cadence Mandybura is contract editor for FriesensPress and managing editor of WordWorks magazine.

The event begins at 7 pm (PT). It will run for an hour and a half.
This is a free event, but registration is required.

Danielle Geller is a writer of personal essays and memoir. She received her MFA in creative writing for nonfiction at the University of Arizona, and a Rona Jaffe Writers’ Award in 2016. Her work has appeared in The New Yorker, Brevity, and Arizona Highways, and has been anthologized in This Is the Place. She lives with her husband and two cats in British Columbia, where she teaches creative writing at the University of Victoria. She is a member of the Navajo Nation: born to the Tsi’naajinii, born for the white man.

Shaena Lambert is the author of the novel, Radiance and two books of stories, Oh, My Darling and The Falling Woman, all of which were Globe and Mail best books of the year. Her fiction has been published to critical acclaim in Canada, the UK and Germany and has been nominated for the Rogers Writers’ Trust Fiction Prize, the Ethel Wilson Fiction Prize, the Evergreen Award, the Danuta Gleed Award and the Frank O’Connor Award for the Short Story. Her stories have been chosen four times for Best Canadian Stories, and have appeared in many publications, including The Walrus, Zoetrope: All Story, Ploughshares, The Journey Prize Anthology.

Cadence Mandybura is a writer and editor based in Victoria, BC. She has worked across industries, never veering far from her compulsion to tell stories and fix apostrophes. Currently, she works as a contract editor for FriesenPress, the associate producer of The Truth podcast, and managing editor of WordWorks magazine.