Writing History and the Past with Shaena Lambert, Eve Lazarus and Michael Prior, moderated by Fiona Tinwei Lam 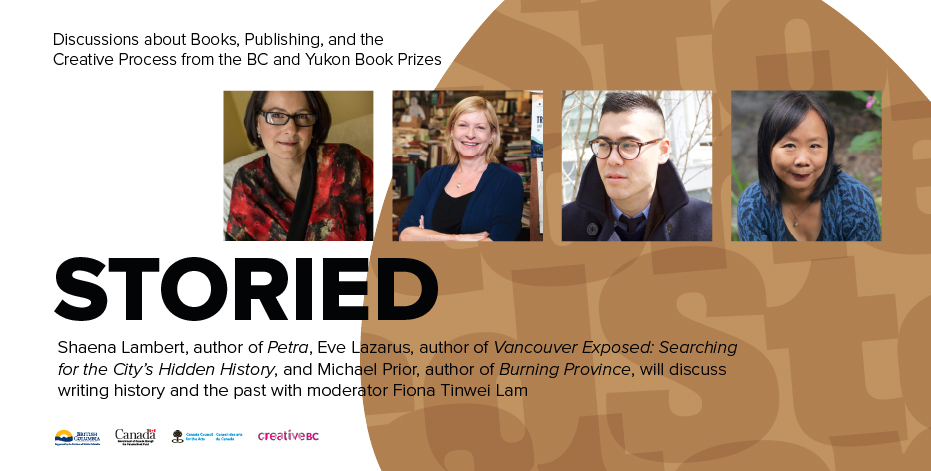 Writing History and the Past with Shaena Lambert, Eve Lazarus and Michael Prior, moderated by Fiona Tinwei Lam

Join the BC and Yukon Book Prizes for Storied: Discussions on Books, Publishing and the Creative Process.

On Wednesday, November 24th, 2021, BC and Yukon Book Prize finalists Shaena Lambert, author of Petra, Eve Lazarus, author of Vancouver Exposed: Searching for the City’s Hidden History, and Michael Prior, author of Burning Province, will discuss writing history and the past with moderator Fiona Tinwei Lam.

The event will begin at 7pm and finishes at 8pm.

This is a free event but registration is required. To register click here.

Funding for the Storied Series is thanks to Heritage Canada, Creative BC, the Government of BC and the Canada Council for the Arts.

Shaena Lambert is the author of the novel, Radiance and two books of stories, Oh, My Darling and The Falling Woman, all of which were Globe and Mail best books of the year. Her fiction has been published to critical acclaim in Canada, the UK and Germany and has been nominated for the Rogers Writers’ Trust Fiction Prize, the Ethel Wilson Fiction Prize, the Evergreen Award, the Danuta Gleed Award and the Frank O’Connor Award for the Short Story. Her stories have been chosen four times for Best Canadian Stories, and have appeared in many publications, including The Walrus, Zoetrope: All Story, Ploughshares, The Journey Prize Anthology…

Eve Lazarus is a Vancouver writer and podcaster with an Aussie accent and a passion for true crime stories, cold cases, and non-traditional history. She is the author of four Arsenal titles: Cold Case Vancouver: The City’s Most Baffling Unsolved Murders (2015), a BC bestseller and 2016 finalist for the Bill Duthie Booksellers’ Choice Award at the BC Book Prizes; Blood, Sweat, and Fear: The Story of Inspector Vance, Vancouver’s First Forensic Investigator (2017); Murder by Milkshake: An Astonishing True Story of Adultery, Arsenic, and a Charismatic Killer (2018); and Vancouver Exposed: Searching for the City’s Hidden History (2020). She is also the author of Sensational Vancouver (2014), , Sensational Victoria: Bright Lights, Red Lights, Murders, Ghosts & Gardens (2012), and her book At Home with History: The Untold Secrets of Greater Vancouver’s Heritage Houses was a 2008 City of Vancouver book award finalist.

Michael Prior is a writer and teacher. He is the author of two books of poems: Burning Province (McClelland & Stewart, 2020), which won the Canada-Japan Literary Award and the BC & Yukon Book Prizes’ Dorothy Livesay Poetry Prize, and Model Disciple (Véhicule Press, 2016), which was named one of the best books of the year by the CBC. Prior is the recent recipient of fellowships from the New York Public Library’s Cullman Center and the Jerome Foundation. His poems have appeared in Poetry, The New Republic, Narrative Magazine, The Walrus, the Academy of American Poets’ Poem-A-Day series, and elsewhere. He is an Assistant Professor of English and an ACM Mellon Faculty Fellow at Macalester College.

Fiona Tinwei Lam is the author of three poetry collections and a children’s book. She edited The Bright Well: Contemporary Canadian Poems on Facing Cancer and co-edited the nonfiction and poetry collection Love Me True: Writers Reflect on the Ins, Outs, Ups & Downs of Marriage with Jane Silcott.  Her work has won TNQ’s Nick Blatchford prize and been shortlisted for the City of Vancouver Book Award. Her work appears in more than 40 anthologies, including The Best Canadian Poetry in English. Her award-winning poetry videos made in collaboration with others have screened internationally. She teaches at SFU Continuing Studies. fionalam.net