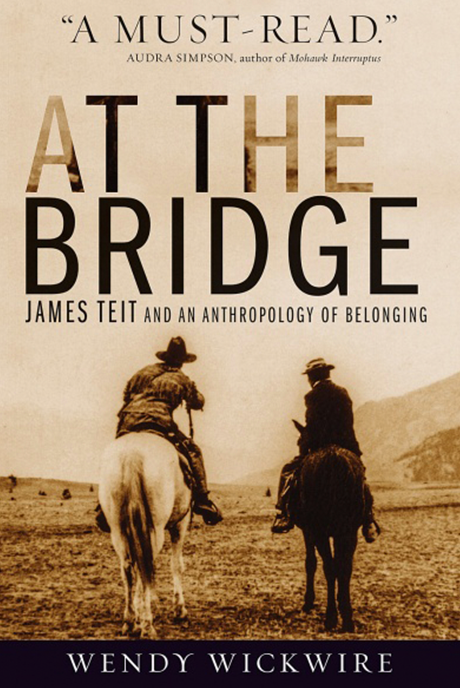 James Teit and An Anthropology of Belonging

Every once in a while, an important historical figure makes an appearance, makes a difference, and then disappears from the public record. James Teit (1864–1922) was such a figure. A prolific ethnographer and tireless Indian rights activist, Teit spent four decades helping British Columbia’s Indigenous peoples in their challenge of the settler-colonial assault on their lives and territories. Yet his story is little known.

At the Bridge chronicles Teit’s fascinating story. From his base at Spences Bridge, British Columbia, Teit practised a participant- and place-based anthropology – an anthropology of belonging – that covered much of BC and northern Washington, Idaho, Oregon, and Montana. Whereas his contemporaries, including famed anthropologist Franz Boas, studied Indigenous peoples as the last survivors of “dying cultures” in need of preservation in metropolitan museums, Teit worked with them as members of living cultures actively asserting jurisdiction over their lives and lands. Whether recording stories and songs, mapping place-names, or participating in the chiefs’ fight for fair treatment, he made their objectives his own. With his allies, he produced copious, meticulous records; an army of anthropologists could not have achieved a fraction of what Teit achieved in his short life.

Wendy Wickwire, a professor emerita in the Department of History at the University of Victoria, is the author of numerous award-winning books and articles. Her first book, Stein: The Way of the River (with Michael M’Gonigle), won the Bill Duthie Booksellers’ Choice Award at the 1989 BC Book Awards. Her next book, Write It On Your Heart: The Epic World of an Okanagan Storyteller (with Okanagan storyteller, Harry Robinson) was short-listed for the Roderick Haig-Brown book prize in 1990. Her third book, Nature Power: In the Spirit of an Okanagan Storyteller (with Harry Robinson), won the Roderick Haig-Brown book prize in 1994. She completed the Harry Robinson trilogy in 2005 with the publication (by Talonbooks) of Living By Stories: A Journey of Landscape and Memory. In 2006, Wickwire and Michael M’Gonigle co-edited a Canadian war diary: Marion Kelsey, Victory Harvest: Diary of a Canadian in the Women’s Land Army, 1940-1944 (McGill-Queens U Press).