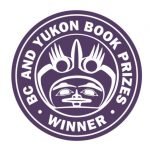 In a small near-future community perched between the ocean and the northern temperate rainforest, a series of disasters is taking a heavy toll. It is early fall and a fuel spill has contaminated the marine foods the village was preparing to harvest. As food supplies dwindle, a small group decides to make a late season expedition to search for sea lions. Surprised by a ferocious storm, they abandon one man, Carpe, on an isolated rock at sea. After ten days they are finally able to return, but he has vanished. The story follows Carpe’s encounters with the Lord of the Rock, who demands retribution for Carpe’s role in the hunt, and Carpe’s fate in the half-life between human and animal, life and death.

Michael Nicoll Yahgulanaas challenges native stereotypes through illustrative story telling. The stories of the trickster Raven, as told by Yahgulanaas, are what most people would call comics, and they are fun, humorous and sometimes rude. Yahgulanaas takes traditional Haida stories and turns them into manga (Japanese-style comics). He has dropped the traditional rectangular boxes and voice balloons associated with the North American comics of Marvel and DC. Instead, he has developed a flowing style that uses a bold line stretched almost to the breaking point – a motif strongly associated with Haida art – to link the images in the narrative.