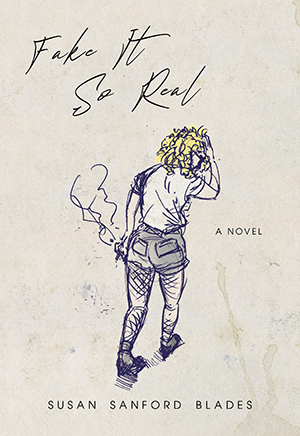 Fake It So Real

Fake it so Real takes on the fallout from a punk-rock lifestyle―the future of “no future”―and its effect on the subsequent generations of one family. In June of 1983, Gwen, a gnarly Nancy Spungen look-alike, meets Damian, the enigmatic leader of a punk band. Seven years and two unplanned pregnancies later, Damian abandons Gwen, leaving her to raise their two daughters, Sara and Meg, on her own.

The voices of Gwen, Sara and Meg weave a raw and honest tapestry of family life told from the underbelly, focused on the grey area between right and wrong, the idea that we are all equally culpable and justified in our actions, and the pain and ecstasy that accompany a life lived authentically.

Susan Sanford Blades lives in Victoria, BC, where she completed an MFA in fiction at the University of Victoria. Her short stories have been published in literary magazines across Canada and in the US and Ireland, including Minola Review, EVENT, The Moth, The Puritan, Numéro Cinq, The New Quarterly, Grain and Prairie Fire and anthologized in Coming Attractions 16.