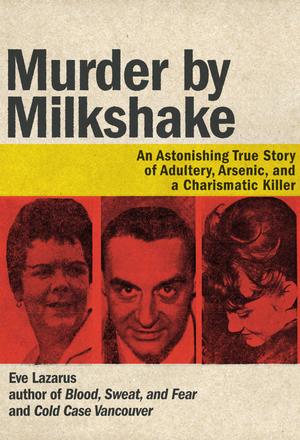 An Astonishing True Tale of Adultery, Arsenic, and a Charismatic Killer

When Esther Castellani died a slow and agonizing death in Vancouver in 1965, the cause was at first undetermined. The day after Esther’s funeral, her husband, Rene, packed up his girlfriend, Lolly; his daughter, and Lolly’s son and took off for Disneyland. If not for the doggedness of Esther’s doctor, Rene, then a charismatic CKNW radio personality, would have been free to marry Lolly, the station’s receptionist. Instead, Rene was charged with murder for poisoning Esther with arsenic-laced milkshakes in one of BC’s most sensational criminal cases.

Eve Lazarus is writer with a passion for true crime stories and non-traditional history. Some of her previous books include Cold Case Vancouver: The City’s Most Baffling Unsolved Murders and Blood, Sweat, and Fear: The Story of Inspector Vance, Vancouver’s First Forensic Investigator.