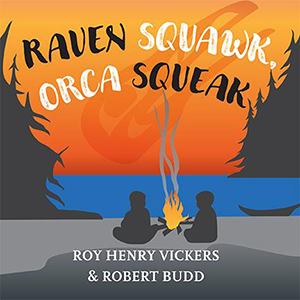 With bright and bold illustrations by celebrated Indigenous artist Roy Henry Vickers, this sturdy board book introduces iconic sounds of the West Coast and supports the language development of babies and toddlers. From the the crackle of a beach campfire to the swoosh of canoe paddles, the rustle and creak of cedars in the wind, the roar of sea lions and the crashing waves of the Pacific Ocean, the rhythmic text, vibrant illustrations and glossy tactile finish of Raven Squawk, Orca Squeak will delight the very youngest readers.

Roy Henry Vickers is a renowned carver, painter, printmaker and storyteller. He is the illustrator and co-author of Harbour Publishing’s popular children’s First West Coast Book series and Northwest Coast Legends series, the latter of which were all shortlisted for the Bill Duthie Booksellers’ Choice Award: Raven Brings the Light in 2014, Cloudwalker in 2015, Orca Chief in 2016 and Peace Dancer in 2017. His other books include Storyteller (Harbour Publishing, 2014) and Voices from the Skeena (Harbour Publishing, 2019). He lives in Hazelton, BC.

Robert (Lucky) Budd holds an MA in history and has digitized many high-profile oral history collections including that of the Nisga’a First Nation. He is the author of Voices of British Columbia (Douglas & McIntyre, 2010), a bestseller which was shortlisted for the 2011 Bill Duthie Booksellers’ Choice Award, and its sequel, Echoes of British Columbia (Harbour Publishing, 2014). He currently lives in Victoria, BC.