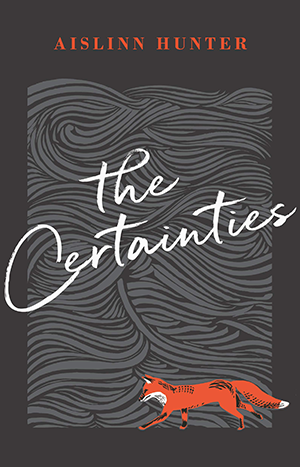 A vivid, moving novel reminiscent of Anthony Doerr and Michael Ondaatje, about the entwined fates of two very different refugees.

In 1940, as the shadow of war lengthens over Europe, three mysterious travelers enter a village in Spain. They have the appearance of Parisian intellectuals, but the trio of two men and a woman are starving and exhausted from crossing illegally through the Pyrenees. Their story, told over a period of 48 tense hours, is narrated by one of the men, who slowly accepts his unthinkable fate. In a voice despairing and elegant, he calmly considers what he should do, and weighs what any one life means. As he does so, his attention is caught by a five-year-old named Pia who wanders near his cafe table. To Pia he begins to address all that he thinks and feels in his final hours–envisioning a rich future life for her that both reflects and contrasts with his own.

Meanwhile, in the 1980s, a woman named Pia seeks solitude on a remote island in the Atlantic, where she works at an inn and reflects on her chaotic childhood. As Pia’s story begins, a raging storm engulfs the island and a boat flounders offshore. Pia and her fellow islanders rush to help–and past and present calamities collide.

By turns elegiac and heart-pounding, a love letter in the guise of a song of despair, The Certainties is a moving and transformative blend of historical and speculative fiction–a novel that shows us what it means to bear witness, and to attend to those who seek refuge, past and present.

Aislinn Hunter is an award-winning novelist and poet and the author of seven highly acclaimed books including the novel The World Before Us, which was a New York Times Editor’s Choice, a Guardian and NPR “Book of the Year,” and winner of the Ethel Wilson Fiction Prize. Her work has been adapted into music, dance, art, and film forms–including a feature film based on her novel Stay, which premiered at the Toronto International Film Festival. Hunter holds degrees in Creative Writing, Art History, Writing and Cultural Politics, and English Literature. In 2018 she served as a Canadian War Artist working with Canadian and NATO forces. She teaches creative writing and lives in Vancouver, BC.