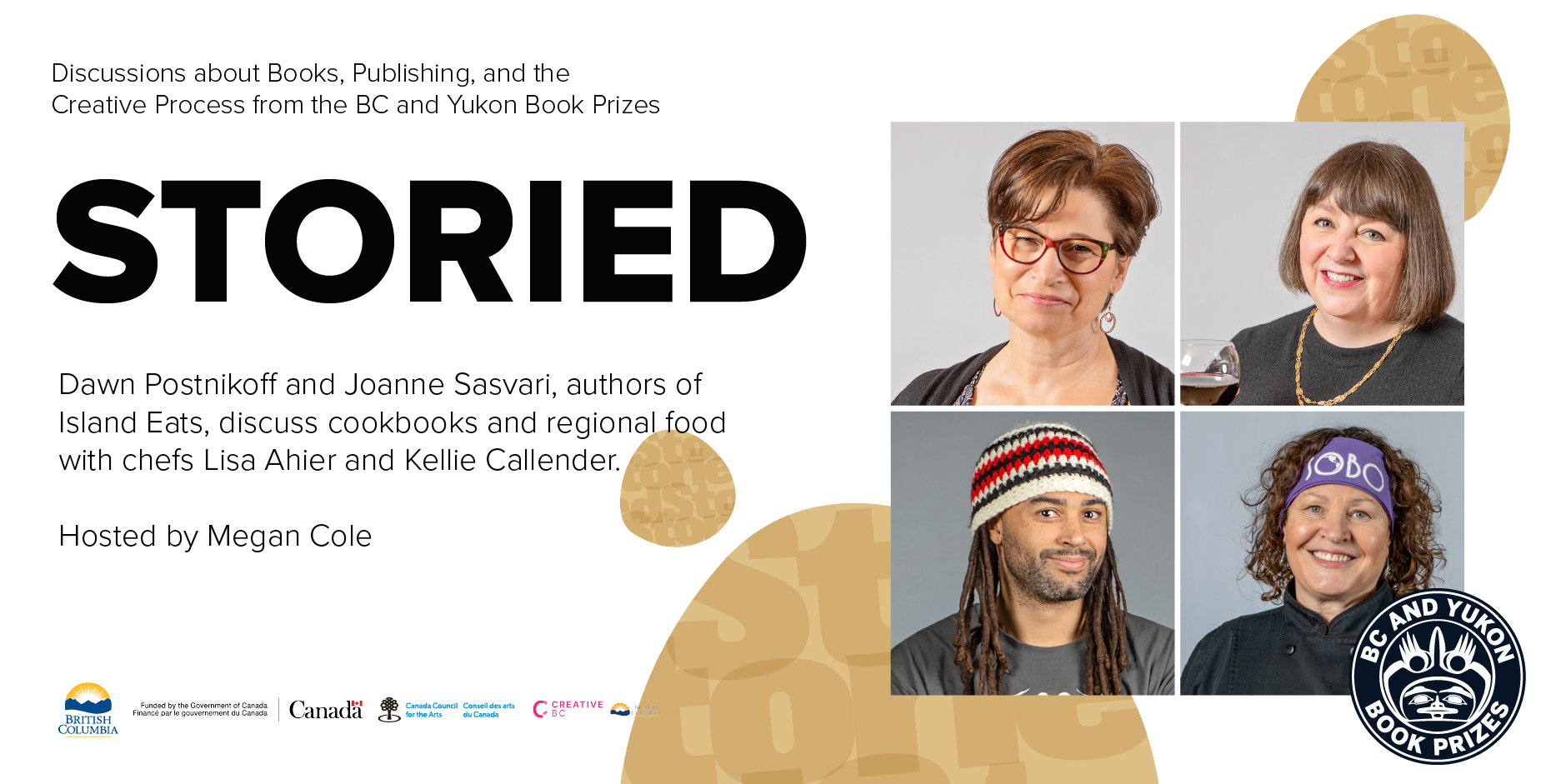 On Wednesday, May 18th, 2022, Dawn Postnikoff and Joanne Sasvari, authors of Island Eats: Signature Chefs’ Recipes from Vancouver Island and the Salish Sea, will discuss their cookbook along with topics related to writing and publishing a regional cookbook. Dawn and Joanne will be joined by guests Lisa Ahier, chef of Tofino’s SoBo Restaurant, and Kellie Callender, chef at Nanaimo’s Melange, who are both featured in Island Eats. Island Eats is a finalist for the 2022 Bill Duthie Booksellers’ Choice Award. This discussion will be moderated by Megan Cole, director of programming and communications for the BC and Yukon Book Prizes and editor of Water and Wood: Recipes from a Coastal Community.

As co-founder of Edible Vancouver Island, Dawn Postnikoff shares her passion for coastal living and the local food and beverage culture with the Edible community. Having left the corporate business world to become an entrepreneur several years ago, she now has multiple projects on the go, most of which focus on promoting culinary tourism throughout the region. Dawn is mom to five “mostly grown-up” children and loves spending time outdoors when she isn’t playing in her kitchen or sipping wine with friends. She lives in the Comox Valley on Vancouver Island.

Joanne Sasvari grew up on Vancouver Island, and in her heart, never left. She is the editor of Vitis, The Alchemist and Westcoast Homes & Design magazines, and writes about food, drink and travel for Edible Vancouver Island, Destination BC’s “Hello BC” website, Vancouver Sun and other Postmedia brands and various other publications, including Food & Wine magazine. She is also the author of the IACP-shortlisted Wickaninnish Cookbook, Vancouver Eats, Frommer’s EasyGuide to Vancouver & Victoria, and Paprika. She lives in North Vancouver and is planning her next trip back to Vancouver Island.

Lisa Ahier was born in Texas and studied at the Culinary Institute of America in New York. After working in kitchens at sea and across several states, she started the Sobo food truck in 2003 with her husband, Artie; Sobo moved to its current location in 2007. Lisa, co-wrote The SoBo Cookbook: Recipes from the Tofino Restaurant at the End of the Canadian Road was published in 2014. Lisa lives in Tofino, B.C

The owner of Nanaimo-based small plate restaurant Melange, Kellie has also cooked in far flung places such as Bhutan, Vietnam, and India. He has many adventurous stories to share and infuses his food with this international flair.

Megan Cole is a tattooed food enthusiast with an obsessive reading habit. She has been published in Chatelaine, Hungry Zine, The Puritan, This Magazine untethered and more. Water and Wood: Recipes from a Coastal Community, a cookbook published in support of the Powell River Public Library, was published in 2017. She is currently working on her first creative nonfiction book Nice Boys Don’t Kiss Like That: Womanhood Explored Through ’90s Rom-Coms, MSN Messenger and First Loves. Megan is the Director of Programming and Communications for the BC and Yukon Book Prizes.