Storied: On writing when history becomes a character 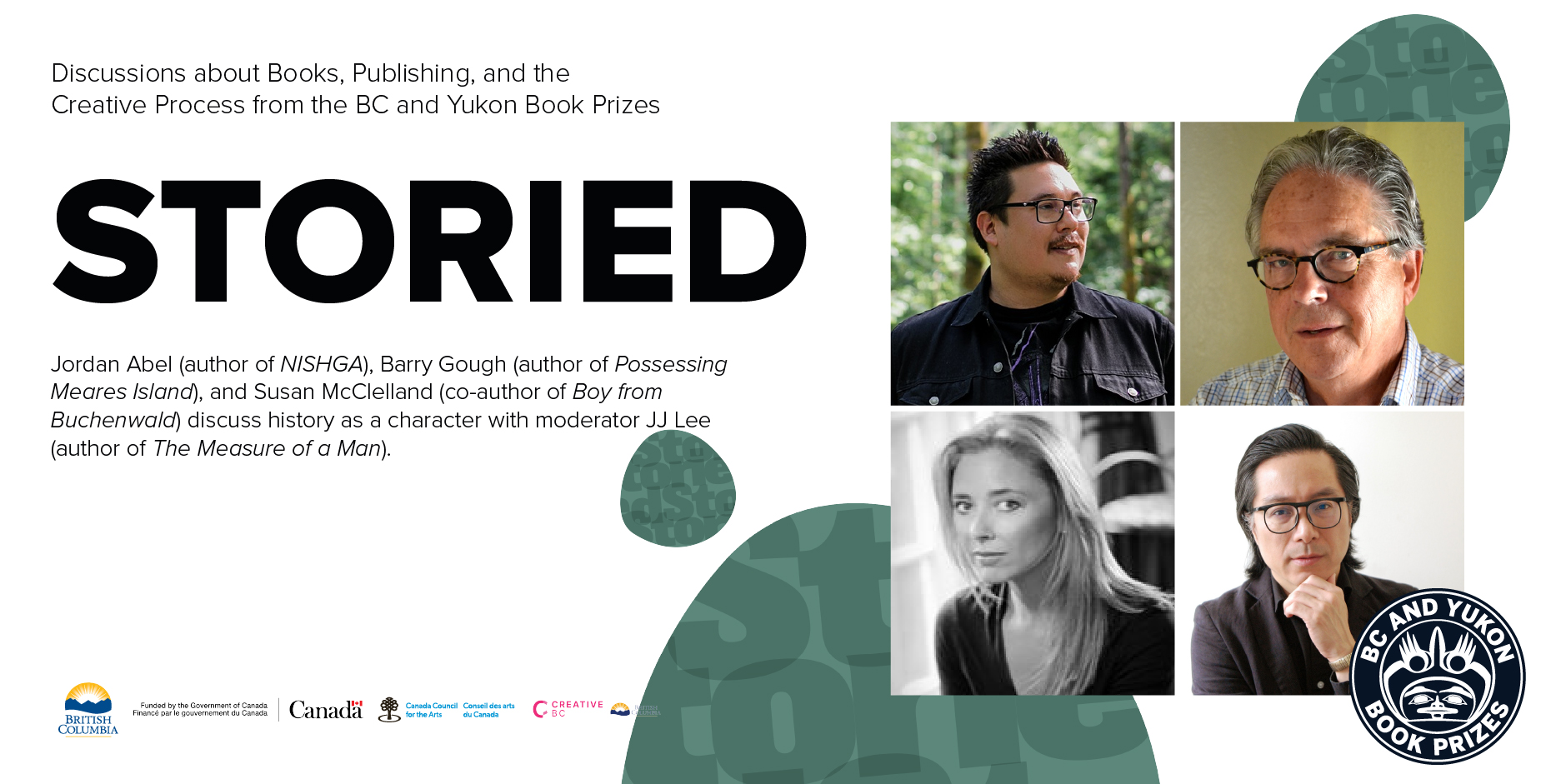 Storied: On writing when history becomes a character

Jordan Abel is a Nisga’a writer from Vancouver. He is the author of The Place of Scraps (winner of the Dorothy Livesay Poetry Prize), Un/inhabited, and Injun (winner of the Griffin Poetry Prize). Abel’s work has recently been anthologized in The New Concrete: Visual Poetry in the 21st Century (Hayward), The Next Wave: An Anthology of 21st Century Canadian Poetry (Anstruther), Best Canadian Poetry (Tightrope), Counter-Desecration: A Glossary for Writing Within the Anthropocene (Wesleyan), and The Land We Are: Artists and Writers Unsettle the Politics of Reconciliation (ARP). Abel’s work has been published in numerous journals and magazines–including Canadian Literature, The Capilano Review, and Poetry Is Dead–and his visual poetry has been included in exhibitions at the Polygon Gallery, UNIT/PITT.

Dr. Barry Gough, one of Canada’s foremost historians, is a Fellow of the Royal Historical Society, Fellow of King’s College London and Life Member of the Association of Canadian Studies, and has been awarded a Doctor of Letters for distinguished contributions to Imperial and Commonwealth history. He is well recognized for the authenticity of his research and the engaging nature of his narratives, and is the author of many critically acclaimed books, including Fortune’s a River: The Collision of Empires in Northwest America (Harbour, 2007), which won the John Lyman Book Award for best Canadian naval and maritime history and was shortlisted for the Writers’ Trust Non-Fiction Prize. Gough is also the author of Gunboat Frontier, a work with staying power that has allowed him the splendid opportunity of mentoring other inquiring writers and curious students on “the politics” of intercultural relations in British Columbis. Possessing Meares Island won the 2022 book prize of the British Columbia Historical Foundation and the Lieutenant Governor’s Silver Metal. Gough has been writing for almost four decades. He lives in Victoria, BC, with his wife, Marilyn.

Susan McClelland’s first book, Bite of the Mango (2008) is the true story of a young Sierra Leonean victim of war and has been published in more than 30 countries, including by Annick Press in Canada and Bloomsbury in the UK. It was a YALSA’s Popular Paperbacks for Young Adults selection, and the White Ravens International Book of the Year. Bite of the Mango was shortlisted for the American Library Association non-fiction, young adult book of the year. Susan has written several commissioned books for various publishers, including Harper Collins and WW Norton and Company for both young adult and adult markets. Susan found her follow-up story to Bite of the Mango in the subject Sungju Lee, a former North Korean street boy, currently pursuing a Ph.D in international relations at George Mason University. Sungju’s book, Every Falling Star, published in 2016 by Abrams, was an Indies Introduce Selection of the American Booksellers Association; Library Guild 2016 Fall Selection; and shortlisted for Japan’s top honour, the 2018 Sakura Medal. Susan’s latest book tells the story of a young survivor of the Yazidi genocide (Annick, April, 2019). Abducted by ISIS, Badeeah Hassan Ahmed managed to shield her 3-year-old nephew throughout her ordeal by saying the child was her own son. As a journalist, Susan has written for the Sunday Times Magazine, Glamour, Marie Claire, Ms. Magazine, The Walrus and The Guardian, as well as numerous other magazines and newspapers. Her stories have been adapted into documentaries for the CBC and BBC’s Panorama.

JJ Lee is the author of The Measure of a Man: The Story of a Father, a Son, and a Suit. It was shortlisted for the 2011 Governor-General’s Literary Award for Non-Fiction, the 2012 Charles Taylor Prize for Literary Non-Fiction, and the 2012 Hilary Weston Writers’ Trust Prize for Non-Fiction. His personal essays and memoir pieces have appeared at CBC Books and in Maclean’s, ELLE Canada, Montecristo, and Nuvo magazines.